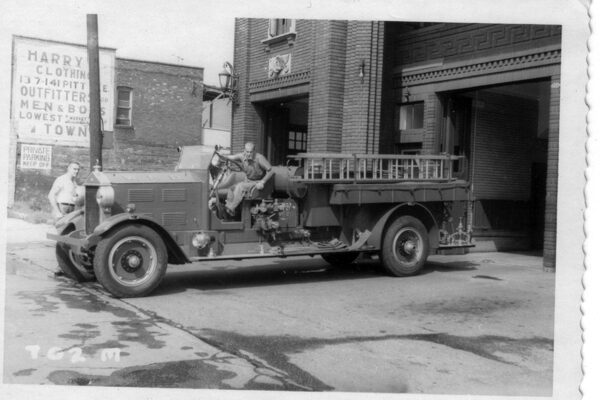 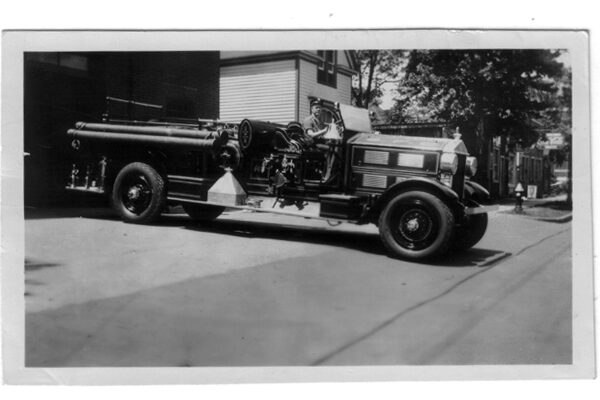 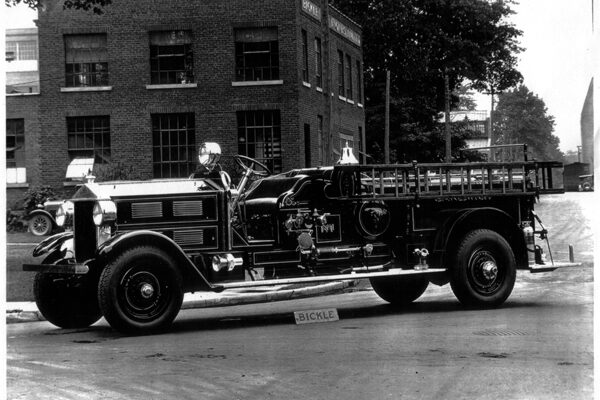 Sandwich's 1930 Bickle at the Woodstock factory 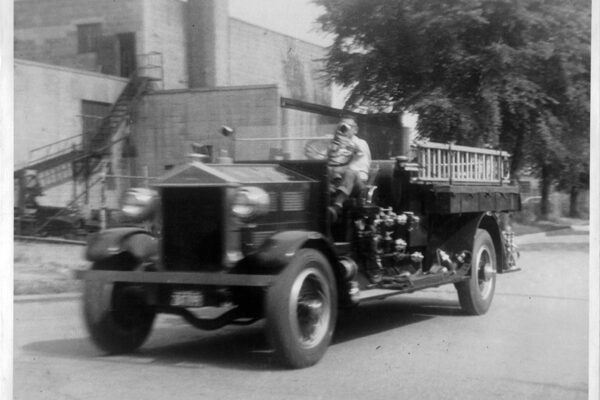 Founded in Winnipeg in 1906 and relocated to Woodstock, Ontario in 1914, Bickle Fire Engines Ltd. was about as close to a purely Canadian motor fire apparatus manufacturer this nation had seen – until the later ascendancy of Pierre Thibault Ltd. of Pierreville, Quebec,For its first dozen or so years in Woodstock, Bickle built pumpers, combination hose trucks and city service hook and ladder trucks on an impressive range of commercial truck chassis – Fords, Internationals, GMCs, Chevrolets and various other makes including Ruggles, Republic, Graham Bros. and Gotfredson. In the late 1920s, under the direction of chief engineer Vernon Bickle King, the Bickle company developed its own distinctive custom-chassis fire apparatus. With their classic gable hoods and cast-aluminum radiators, these handsome fire engines were built in several sizes with pump capacities ranging from 420 to 900 gallons-per minute and were marketed under such names as the Bickle Volunteer, Underwriter and Chieftain At the top of the line, however, was the Bickle Canadian – a real big-city fire engine powered by an Ahrens-Fox six cylinder motor and equipped with a Bickle-built 800 Imperial gallon-per-minute (1000 U.S.) rotary gear pump.

In the late 1920s and early 1930s, Bickle Fire Engine Ltd. built fewer than a dozen of these special triple combination pumping engines for cities from Halifax to Vancouver, Although not originally purchased by the City of Windsor, two of these big Bickle Canadian pumpers served the Windsor Fire Department for more than 30 years. Both joined the W.F.D. roster as the result of the 1935 amalgamation by Windsor of the neighboring communities of East Windsor, Walkerville and Sandwich.

The first of this impressive pair was delivered to the Town of Walkerville in mid-1929. Purchased at a cost of $14,500 – with a $2,000 allowance for two aircooled 1913 W.E. Seagrave Combinations traded in – the big Bickle Canadian was placed in service as Engine No. 2 at the Walkerville Fire Department’s Station 1 on Walker Rd. at what is now Richmond St. Six years later, the Bickle was transferred to the Windsor apparatus roster, along with Walkerville’s 1927 Gotfredson-Bickle pumper and 1913 W.E. Seagrave 85’ aerial with Gotfredson tractor. Engine 2 continued to respond to alarms out of the former Walker Road hall, which became Windsor’s Station #2.

In 1938, the 1929 Bickle was retrofitted with a windshield by the W.F.D. shops, and a box for 1-1/2” hose was bolted to the left-hand side of the apparatus. In 1949 old Engine No. 2 was repainted and its Ahrens-Fox motor replaced with a new Waukesha six-cylinder engine. With the delivery of a new Bickle-Seagrave pumper in 1950, Engine 2 became a spare, filling in for other engines when they were in the shop for repairs or maintenance.

The Town of Sandwich received a virtually identical Bickle Special pumper in 1930. Five years later this 800 gpm pumper also joined the Windsor Fire Department roster and was renumbered Engine No. 6. The 1930 Bickle remained in front-line service at Station No, 6, the former Sandwich Fire Hall on Mill Street in the city’s west end, until the fall of 1953, when it was replaced by a new Bickle-Seagrave pumper. Engine 6 then joined the spare fleet, stored in a back bay at the W, F.D. Headquarters station on Pitt St. E.

Both of the Bickle pumpers served as active spares and training pumpers into the early 1960s. Ironically, the newest of the pair – the ex-Sandwich 1930 Bickle – came to the end of the line first. After three decades of faithful service, It was stripped and sold for scrap in 1960.

Old Engine No. 2 soldiered on for another five years. In August of 1965, the Bickle was replaced by a shiny new Engine #2 – a cab-forward Mack. Not long after, Chief of Apparatus Romeo J. Nantais had the 1929 Bickle dismantled and broken up for scrap. But old Engine 2’s “heart” beat on! Its low-mileage Wauksha engine was transplanted into Aerial No. 3A – a 1952 Bickle-Seagrave 75’ service aerial which continued to answer alarms for another 17 years before it was retired and sold in the early 1980s. .