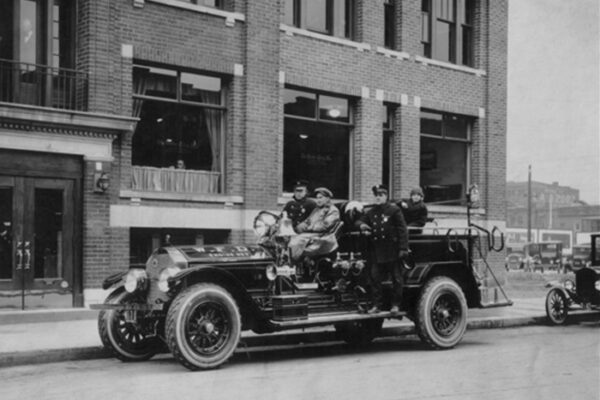 Just-delivered Engine No. 3, 1923 American-LaFrance in front of the Windsor Daily Star offices on Ferry Street 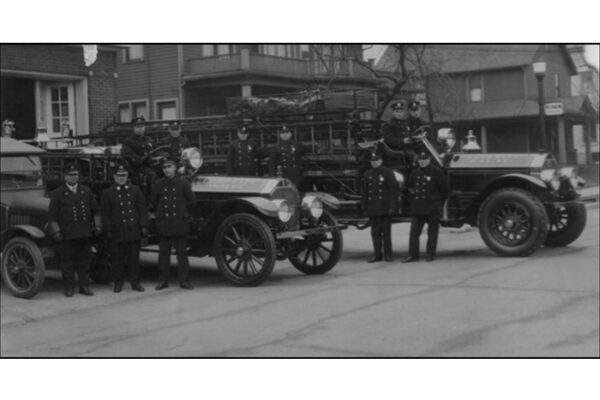 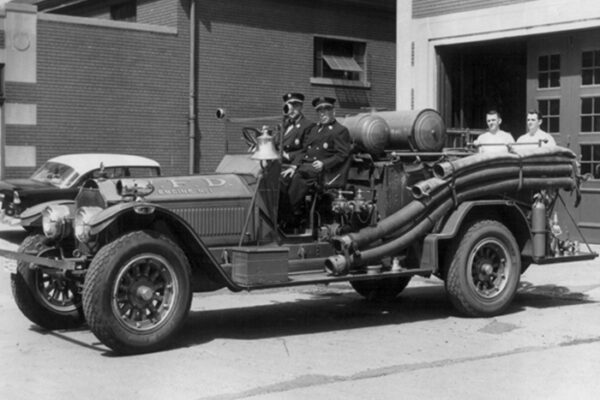 In 1914, the American-LaFrance Fire Engine Company of Elmira, N.Y. opened a Canadian subsidiary plant and office in Toronto. Founded in 1904 with roots extending all the way back to 1832, American-LaFrance – still in business today – was the North American fire apparatus industry’s largest and best-known player for most of the last century.From the early 1920s through the 1940s, the backbone of Windsor’s Fire Department was a fleet of chain-drive American-LaFrance pumpers and ladder trucks. There were six in all, including four triple combination rotary-gear pumpers and two city service hook and ladder trucks. Four of these – three Type 45 pumpers and a Type 14 service ladder truck – were purchased by the City of Windsor. Two more – a Type 75 pumper and another Type 14 ladder truck – were added to the Windsor Fire Department apparatus roster through the annexation of the former Town of East Windsor in 1935.

All six sported low, gabled hoods, gracefully curved front fenders and attractive German silver radiators with a cloisonné American-LaFrance badge on the upper left. All six were powered by American-LaFrance six-cylinder engines and were built with wide-open cabs without windshields. All were retrofitted with steel windbreakers and windshields by the W.F.D. repair shops in the late 1930s.

The first two of these chain-drive classics were delivered to Windsor in 1920. This pair included an 800 gallon-per-minute Type 45 Triple Combination Pumper (Serial #2878) with soda-and-acid chemical tank, and a matching Type 14-6 long-wheelbase city service hook and ladder truck (#2931). Originally lettered Engine No. 2 and later Engine No. 5, this pumper was in service for more than 30 years before it was traded in to Bickle-Seagrave Ltd. on a new pumper in late 1952. Trade-in allowance was a rather paltry $350.

After more than two decades of service at the W.F.D. Headquarters station on Pitt St. E., Ladder No. 1 – the 1920 ladder truck – was scrapped in 1941 and replaced by a new shop-built Ford cab-over engine service ladder truck.

A second 800 gallon-per-minute Type 45 triple combination pumper (#4062) was delivered to Windsor in 1923. Instead of the usual chemical tank, this pumper was equipped with a booster water tank system for fighting small fires. Lettered Engine No. 3 this big rotary gear pumper was also in service for 30 years before being traded in to Bickle-Seagrave on another new pumper in 1953.

The third and last Type 45 Triple Combination Pumper (Reg. #5170) was delivered in August, 1925. Originally lettered Engine No. 4, it was renumbered Engine No. 1 in the late 1940s. Donated to a local antique auto club in 1959, it had perhaps the most interesting fire service career of the four pumpers and will be separately profiled in our next installment.

The appropriately-named Ford City sprang up around the huge Ford Motor Company of Canada automobile assembly and components plant complex along Drouillard Road in the `teens and 1920s. In the early 1920s, the volunteer Ford City Fire Department received two American-LaFrances – a Type 75 Triple Combination Pumper with 600 gallon-per-minute rotary gear pump (#3752) delivered in 1922, and a Type 14-6 city service hook and ladder truck (#4872) two years later. Both were housed in the two-bay firehouse attached to the Ford City Town Hall on Drouillard Rd. just south of Riverside Drive East. In the mid-1920s, Ford City was renamed East Windsor.

Relettered Engine No. 3, the 1922 Type 75 pumper joined the W.F.D. roster – as did the 1924 Type 14 city service ladder truck, which was subsequently relettered Ladder No. 3. This matched pair of American-LaFrances was relocated to the former Walkerville Fire Station No. 2 on Turner Road near Tecumseh Rd. E. After nearly three decades of service, the 1922 LaFrance pumper was traded in to Bickle-Seagrave Ltd. for an allowance of $350 on a new V-12 pumper on May 16, 1950.

The 1924 American-LaFrance city service ladder truck remained in service at the Turner Road station until late October 1952, when it was replaced by a new shop-built city service ladder truck on a long-wheelbase Dodge truck chassis. Stripped of its ladders and other equipment and sold to the Kovinsky scrapyard for $200 in late 1952, the retired ladder truck was later acquired by the late Walter Perry — the man behind Windsor’s famed Emancipation Celebration held annually in August. The ladder racks were removed to make a platform on which the pageant’s Miss Sepia beauty contestants were to ride in the big Emancipation Day parade. This conversion was never done however, and after rusting away in a backyard on McDougall St., the old LaFrance was hauled off and scrapped in 1956.

Amazingly, no fewer than three of the four chain-drive American-LaFrance pumpers are still on the road today! The 1922 ex-Ford City pumper was eventually purchased by the Seeley’s Bay Fire Department, near Kingston, which still uses it as an antique parade piece. Similarly, the 1923 Type 45 was acquired by the fire department in North Gower, near Ottawa and is also still in parade condition. The 1925 Type 45 pumper today occupies a place of honor at the Canadian Transportation Museum at the Southwestern Ontario Heritage Village on the Arner Town Line near Essex – a truly remarkable survival rate.