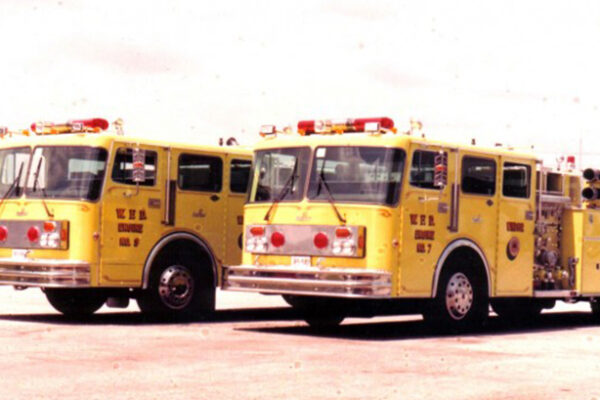 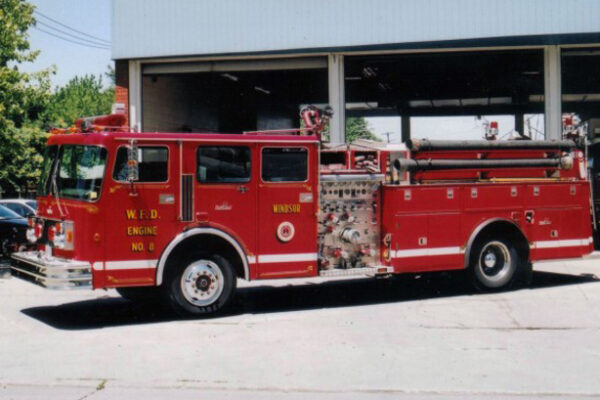 Redesignated Engine 8, one of the Spartans after being repainted red

In late 1981, Windsor ordered two new pumpers on Spartan four-door chassis – the W.F.D.’s first sedan-cab apparatus – from King-Seagrave Ltd. of Woodstock, Ontario. Before the chassis could be delivered, however, King-Seagrave filed for bankruptcy. One of the completed chassis, painted lime-yellow and already lettered W.F.D. Engine No. 7 – was displayed at the 1982 Canadian Association of Fire Chiefs annual convention in Winnipeg. Following the convention the two bare chassis/cabs were delivered to Windsor and stored at the W.F.D. headquarters station on Goyeau St. A new contract to build the pumpers was subsequently awarded to Pierreville Fire Trucks, and the Diesel-powered chassis were driven to Pierreville, Quebec in October, 1982.

The completed pumpers, with 1050 gallon-per-minute pumps and 400-gallon booster tanks, were delivered back to Windsor in April, 1983. Lettered as Engines 7 and 9, both were placed into service in late May – Engine 7 at the headquarters hall on Goyeau St. and Engine 9 at Station 4 on College Avenue. With their roomy four-door cabs and demountable Akron Apollo master stream nozzles, these pumpers were well-liked by their crews.

Engine 7 remained “first-out” at headquarters until 1991, when it was replaced by a new Seagrave pumper and reassigned to Station 4 on College Ave. Its twin, Engine 9 was relocated to Station 6 on Tecumseh Rd. E. In the meantime, the Windsor Fire & Rescue had switched from lime-yellow back to the traditional red. The two Pierreville/Spartans were later overhauled and repainted red and numbered Engines 7 and 8. With the delivery of more new apparatus, the Spartan engines (one relettered Engine 11) were used as spare pumpers.

Following the delivery of two new Rosenbauer/Spartan pumpers in mid-2008, the well-worn Pierrevlle/Spartan engines were retired from service. In August, they were driven to a used truck centre on Highway 401 in Chatham, where they were clearly visible from the road for many months. By spring of 2009, they were gone.

The 1982/83 Pierreville/Spartans had served the citizens of Windsor well for precisely 25 years.