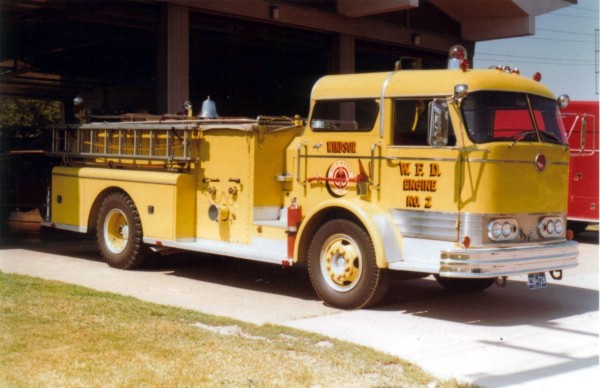 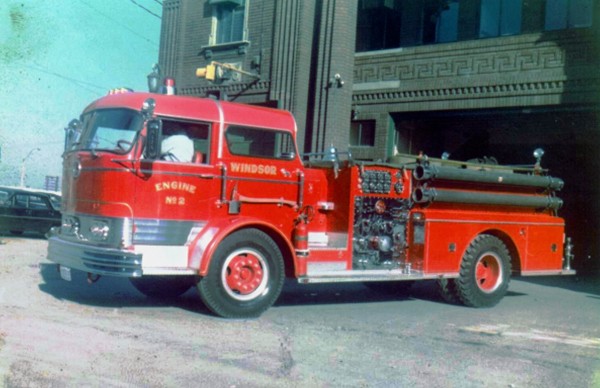 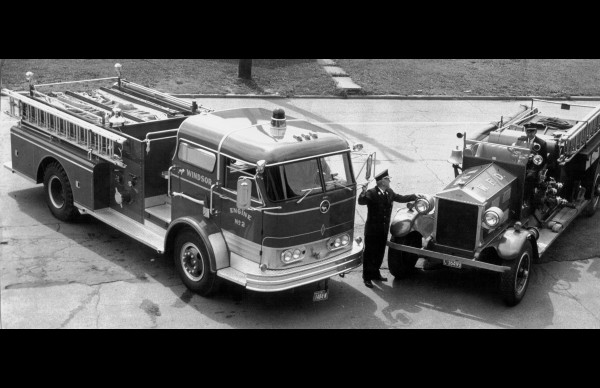 For most of the past century, the “big three” of the U.S. and Canadian fire apparatus industry were American-LaFrance, Seagrave – and Mack.Mack was unique among North American heavy truck manufacturers in that this fabled company was the only commercial truck maker that also made fire engines. Founded in 1900, Mack entered the fire apparatus business with its legendary Model AC Bulldog just after the First World War. In the 1920s Mack introduced a special six-cylinder fire apparatus chassis and a tractor-trailer aerial ladder truck with engine-driven hoist.

Mack’s Canadian subsidiary company did not enter the Canadian fire apparatus market until after the Second World War. A relatively small number of Mack L-Series and B-Series pumpers and ladder trucks were delivered to Canadian fire departments between 1947 and 1957.

It wasn’t until the arrival of Mack’s new custom cab-forward “C” Series in 1958 that Mack became a major player in the Canadian fire truck industry. Montreal, Toronto, Winnipeg, Edmonton and Ottawa ordered sizeable numbers of Mack C-Series pumpers and aerial ladder trucks through the 1960s.

The Windsor Fire Department purchased just one Mack — a custom-chassis Model C-125F 1,050 gallon-per-minute pumper delivered in the summer of 1965. Built in the Mack Trucks of Canada Ltd. plant in Toronto at a contract price of $26,041, the canopy cab pumper was delivered to the Windsor shops on Sunday afternoon, August 9, 1965. Behind the wheel was well-known Mack delivery engineer Gaston Tremblay who conducted the underwriters’ acceptance test of the new pumper two days later – one day after Harold Coxon succeeded Raymond May as Chief of the Windsor Fire Department.

Powered by a six-cylinder Mack Thermodyne engine, the handsome canopy cab pumper with 250-gallon booster tank replaced an ex-Walkerville 1929 Bickle pumper which was then dismantled and scrapped. Lettered Engine No. 2 on its cab doors, the new pumper was placed in service at the Windsor Fire Department Headquarters station at 254 Pitt St. E. on August 27. Five years later, Engine 2, Engine 1 and Aerial No. 1A moved into the impressive new W.F.D. headquarters station on Goyeau Street.

The Mack remained the front engine there until early 1973, when it was displaced by a new Pierreville-Ford pumper and reassigned as the second-out, or “back” engine.

With the delivery of four new Pierreville-Ford pumpers in 1977, Engine No. 2 was transferred to Station 3 on Ouellette Ave. at Edinburgh St. When two more new pumpers were placed in service in 1983, Engine 2 became a spare pumper, filling in for other engines as needed. By this time the Mack had been repainted Safety Yellow. On the night of June 30, 1985 old Engine 2 was pressed into service at a major fire that destroyed a huge industrial plant complex on Walker Road.

Ironically, the 28-year-old Mack’s last public appearance in Windsor was at an antique fire engine show and muster hosted by the Great Lakes Chapter of the Society for the Preservation and Appreciation of Antique motor Fire Apparatus in America on Windsor’s downtown waterfront in July, 1993.

Among the participants at this show – which featured more than 60 antique and vintage fire engines from Canada and the U.S. – was SPAAMFAA.past-president Marshall Sanford of Redding, Connecticut. Told the Mack was up for sale, he bought it on the spot. The following day he drove it – without incident – to his home near Danbury, Ct. where old Engine 2 today resides in pampered retirement with Mr. Sanford’s three other vintage fire engines – a “happy ending” if ever we heard one!