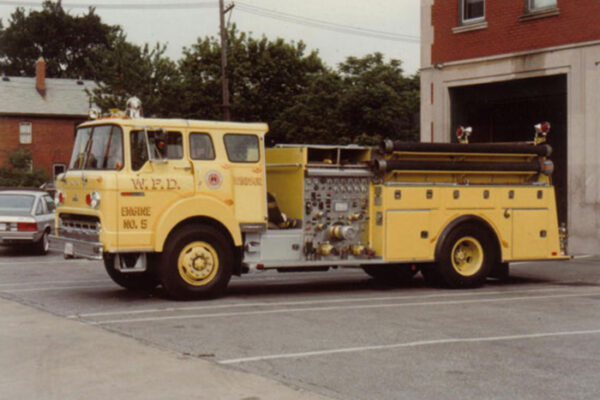 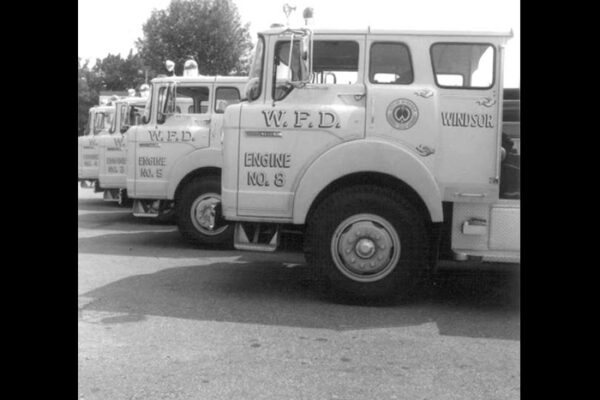 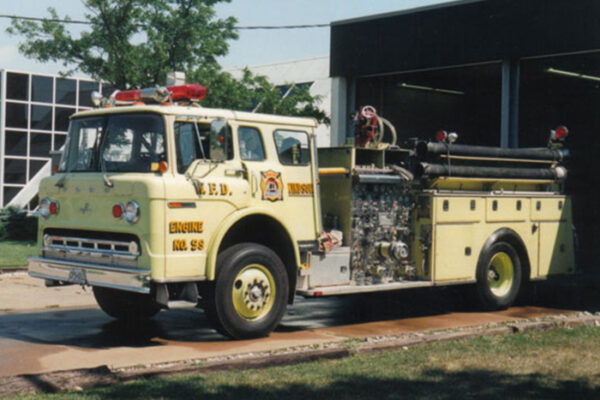 Although the Windsor fire Department had purchased two new pumpers in the early 1970s, the rest of the city’s pumper fleet was rapidly becoming antiquated. An American-LaFrance pumper delivered in 1948 and three Bickle-Seagrave pumpers purchased in the early 1950s were wearing out and in urgent need of replacement.Instead of replacing them one at a time out of the department’s annual apparatus budget, a process that would take at least four years, in 1974 Fire Chief Jack Malott and Chief of Apparatus Melchior (Mike) Koehl made a convincing case to City Council for replacing the outdated apparatus all at once. In June 1975, the Windsor Fire Department placed what was, up to then, the largest single order for new fire apparatus in the department’s history. The $250,000 contract for four new diesel pumping engines was awarded to Pierreville Fire Trucks of Pierreville, Quebec.

The first two of the new pumpers – Engines 5 and 8 – were delivered to the W.F.D. shops on Richmond St., next door to Station 2, on May 14, 1977. The second pair – Engines 3 and 4 – arrived on July 18. After several weeks of testing, outfitting and driver and crew training, the new pumpers were gradually placed into service, one at a time. By the end of September, all were on-line. Engine 3 went into service as the “first-out” engine at Headquarters Station 1 on Goyeau St. Engine 4 was assigned to Station 4 on college Ave. Engine 5 entered service at Station 5 on Cabana Rd. W., while Engine 8 went to Station 6 on Tecumseh Rd. E. But before they went into service, Engine 3 was used as a caisson at the funeral of longtime W.F.D. Signals Division member Mark Learmonth.

With the delivery of two more new pumpers in 1983, Engine 5 was reassigned to Station 2 on Walker Rd. and Engine 4 moved to Station 5. Engine 3 went to Station 3 on Ouellette Avenue. Over the years the numbers on their cab doors constantly changed as they were reassigned to various fireballs. The Pierreville/Fords served the citizens of Windsor well for more than two decades. There were few fires in the city at which at least one of these familiar lime-yellow rigs wasn’t present. As many as three of them could be found at major fires. Most of the members of today’s Windsor Fire & Rescue Service probably trained or worked on one of these sturdy pumpers.

By the mid-1990s, two of the 1977 Pierreville/Ford pumpers were being used as spares. Although the WFRS had since switched back to the traditional fire engine red, none of the ’77 Fords were ever repainted.

The Pierreville/Ford era on the W.F.D. ended abruptly in 1998 with the delivery of five Sutphen Aerial Towers – all equipped with pumps. Two Sutphen mini-towers immediately replaced two conventional pumpers. Three of the 1977 Fords were retired soon thereafter, with the fourth retained as a training unit or spare. One by one, they were gradually disposed of.

Except for one. Stripped of equipment, its paint badly faded, the last of the venerable Fords was quietly rusting away in a far corner of the training yard at the W.F.D. shops on Kew Street when we stopped by a few years ago.

As a footnote, two of the pumpers the 1977 Fords replaced – 1952 and 1953 Bickle-Seagraves – were traded in and driven to the Pierreville Plant in Quebec. The third, a 1950 Bickle-Seagrave, was later sold to a local collector. It has since been beautifully restored by another fire apparatus buff in Michigan. A fourth pumper, a commercial-chassis Ford acquired through annexation, was disposed of before the new engines arrived.