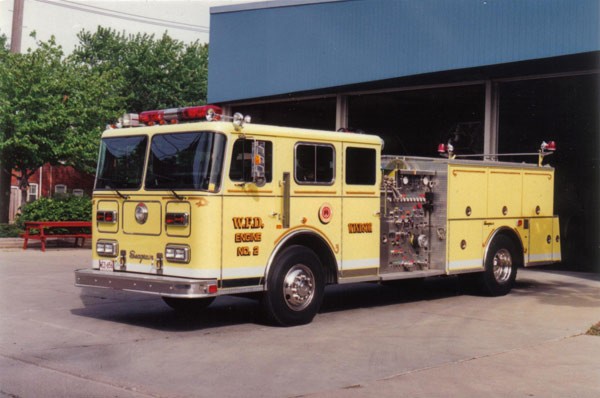 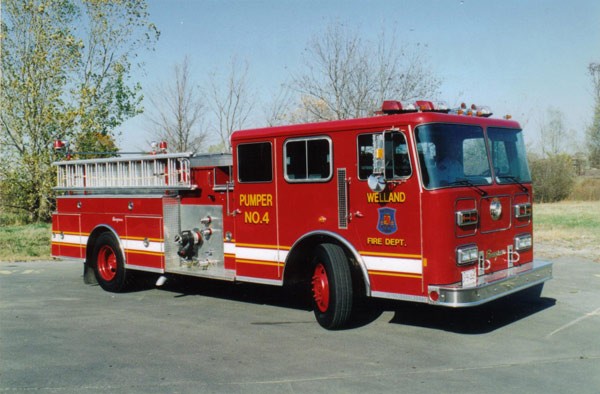 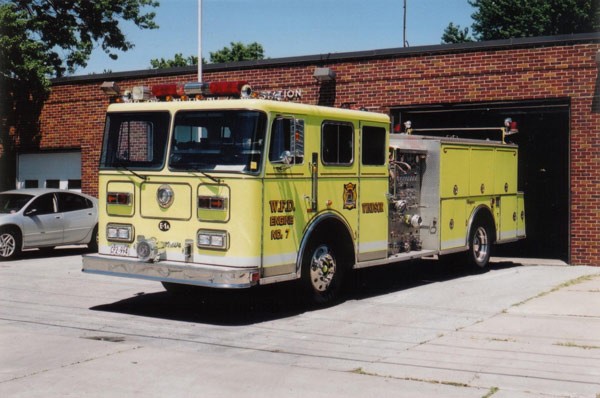 Formerly Engine 10, the 1991 Seagrave in service as Engine 7

After an absence of many years, the famed Seagrave nameplate returned to the Windsor Fire & Rescue Services apparatus roster in the early 1990s.

Founded in Detroit in 1881, The Seagrave Company relocated to Columbus, Ohio in 1892. Eight years later, in 1900, Seagrave founder Frederic S. Seagrave decided to form a Canadian subsidiary company. Run by his son Warren Edmund Seagrave, the W.E. Seagrave Fire Apparatus Co. delivered horse-drawn, and later motor-driven, fire apparatus to fire departments all over Canada, from Victoria to Quebec City, before the company went out of business in about 1918.

Sadly, the former W.E. Seagrave factory on the west side of Walker Road near Niagara St. was torn down two years ago. And for reasons still not altogether clear, Seagrave Corporation founder Frederic S. Seagrave, who died in 1923, is buried in Windsor Grove Cemetery on Giles Blvd. at Howard Avenue. Warren E. Seagrave died in 1953 and is buried in Port Huron, Michigan.

In the mid-1930s, Bickle Fire Engines Ltd. of Woodstock, Ontario entered into an arrangement with the Seagrave Corporation under which Bickle would build Seagrave motor fire apparatus under licence for the Canadian market. The Windsor Fire Department purchased a Bickle-Seagrave V-12 pumper in 1950; another pumper and a 75-foot service aerial in 1952, and yet another Bickle-Seagrave pumper in 1953. When the last of these rigs were retired from active service in the late 1970s and early `80s, the revered Seagrave name disappeared from the W.F.D. roster.

By the late 1980s, Windsor’s pumper fleet was rapidly aging and at least two new pumpers were urgently needed. In 1990, the North American Free Trade Act had been enacted, and Canadian fire departments could now purchase fire apparatus directly from manufacturers in the United States free of customs tariffs and duties.

So it was that, after much study, the Windsor Fire Department’s Chief of Apparatus Melchoir (Mike) Koehl recommended the purchase of two Seagrave Model JB-40-DB custom-chassis pumpers from Seagrave Fire Apparatus of Clintonville, Wisconsin at a contract price of $242,563 each. Following the usual pre-delivery inspection trip to the U.S. factory as the pumper neared completion, the first of the two pumpers was delivered to Windsor in mid-1990. Lettered Engine No. 2, the lime-green 1050 Imperial gallon-per-minute pumper with four-door sedan type cab and 400-gallon water tank was placed into service at Station 2 on Richmond St. at Walker Road.

A second, identical pumper was delivered the following year. Lettered Engine No. 10, it was placed into front-line service at WFRS Station 1 on Goyeau St.

But Engine 2 had a tragically short service life. In September, 1995, barely five years after it was delivered, the 1990 Seagrave was heavily damaged while responding to an alarm. The pumper struck the wall of the Wyandotte St. E. viaduct just east of Walker Road. While there were, thankfully, no serious injuries to its crew, the pumper was written off as an insurance loss. Stripped of its equipment, it was sold for salvage.

Amazingly, however, old Engine 2 subsequently went on to a second firefighting career on another fire department. The wrecked rig was totally rebuilt by a truck repair shop and purchased by the Welland Fire Department. Now painted red, the 1990 Seagrave is still in service today as Welland’s Pumper No. 4.

Eighteen years after it was delivered, the 1991 Seagrave (Shop #4007) is still on the WFRS roster. After many years of service as Engine No. 10, running out of the headquarters hall, the last active lime-green rig on the WFRS was relettered Engine 7 and reassigned to Station 7 on Lauzon Road. With the delivery of two new pumpers in 2008, Engine 7 became a spare engine, filling in for other pumpers temporarily out of service for maintenance or repair.

After 128 years, Seagrave is North America’s oldest continuous builder of fire apparatus. Once more, history repeats itself. In 1999 the U.S. company purchased the former Almonte Fire Trucks operation in Carleton Place, near Ottawa – which it later renamed Seagrave Canada.

The proud Seagrave name has been a familiar one in Windsor well for most of the past 100 years.