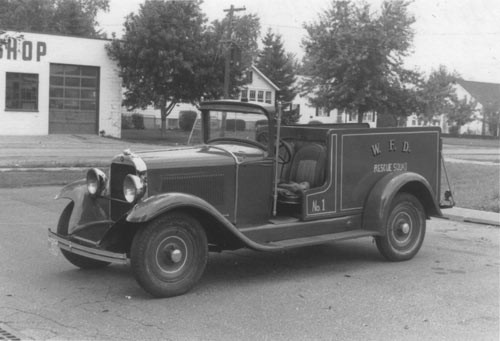 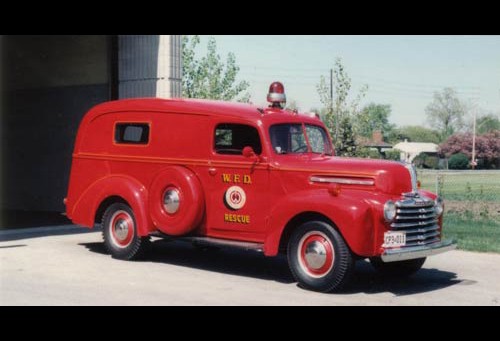 Refurbished and repainted, here’s how the `47 Mercury looks today 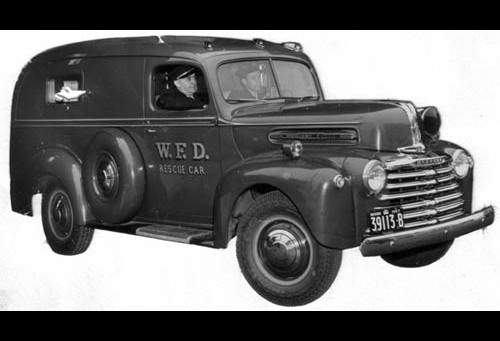 Just over a century ago, in the latter part of 1906, the Springfield, Massachusetts Fire Department placed the first “Flying Squadron” into service. Using a locally-built Knox squad car, the Flying Squadron was organized to supplement temporarily depleted manpower during meal periods. At that time, it was common fire department practice to allow a certain number of firefighters time off for meals. Far faster than horse-drawn equipment and carrying up to a dozen men, the Flying Manpower Squadron could speed to any part of the city to augment the men on the fireground.

The Detroit Fire Department placed its first Flying Squadron in service in 1908, utilizing a Packard squad car. The Flying Squadron was typically made up of experienced firefighters with both engine and ladder company skills. Over the next few decades, these elite manpower units evolved into Rescue Squad companies manned by fire fighters specially trained in rescue techniques. In addition to its supplemental manpower, the Rescue Squad Car carried heavy rescue tools and equipment. In larger cities the Rescue Squad accompanied pumpers, hose wagons and ladder trucks to extra-alarm fires but could be special-called to any emergency such as motor vehicle accidents, trench cave-ins or building collapses.

With the introduction of pulmotors and other early resuscitation equipment in the 1920s, the rescue squad took on a more focused life-saving role. The squad was routinely called out to gas leaks, drownings or to revive citizens who may have collapsed or were having difficulty breathing.

Ironically, Windsor’s first rescue squad was literally formed by “accident”. On the afternoon of January 18, 1933, Fire Chief Clarence DeFields was responding to a fire call in his 1929 Studebaker coupe. Turning from Dougall Avenue onto Wyandotte Street, the chief’s car was struck on its left side by a trolley car. Chief DeFields was knocked unconscious but was back in his office the next day. His car wasn’t so lucky. It was deemed too heavily damaged to repair and was written off.

But Arthur Flatray, the Windsor Fire Department’s talented master mechanic, had the crumpled passenger car body removed from the chassis. Within a matter of months his versatile workshop crew had converted the four-year-old Studebaker into the city’s first Rescue Squad Car. With a hand-picked crew, the Studebaker responded to alarms out of the Fire Department Headquarters Station at 254 Pitt St. E. Two prominent local doctors – Dr. W. Porte Marshall and Dr. C.F. Dunfield were appointed Attending Physicians on the squad. The Border Cities Star reported that by early 1934, in its first year of operation the Rescue Squad had successfully resuscitated 35 of the 45 cases it had responded to.

In 1947, the outmoded, well-worn Studebaker was replaced by a new one-ton Mercury panel truck which was converted into a combination Rescue Car and Ambulance by the workshop staff. A big Sterling 30 Sirenlite was mounted on the right front fender. The Rescue Car responded to all multiple alarms and was occasionally used to transport members of the department to and from their homes and area hospitals. This service was discontinued in 1963.

Still in excellent original condition with very few miles on its odometer, the ambulance was turned over to the workshop staff as a utility vehicle in 1974, but was rarely ever used as such. In the 1980s, Chief of Apparatus Mike Koehl persuaded his superiors to keep the Mercury as an antique. Between repair jobs, the former Rescue Car was repainted and restored. Used mainly for parades and other W.F.D. public relations activities, the ambulance was kept at Station 5 on Cabana Rd. along with the department’s other two antiques – the Elcombe and a1938 Ford pumper.

Today – sixty years after it was purchased – the 1947 Mercury Rescue Car languishes in a spare apparatus bay at Station 7 on Lauzon Road, awaiting some hard-to-find engine and brake parts. Although any number of vintage vehicle collectors would love to have this well-preserved gem, there are – thankfully – no plans to dispose of it.

Even more amazingly, however, Windsor very first rescue squad – the 1929 Studebaker – has also survived. Following its retirement in the late 1940s, the former rescue squad car was sold for $240 to a member of the fire department. Captain Minto Fuller used the Studebaker as a runabout on his property at Union On The Lake, near Harrow. The old car, weathered and somewhat the worse for wear, was rediscovered out in the county in the late 1970s. Rescued, refurbished and repainted, it was sold to a private individual sometime in the 1980s. Its present whereabouts are unknown.