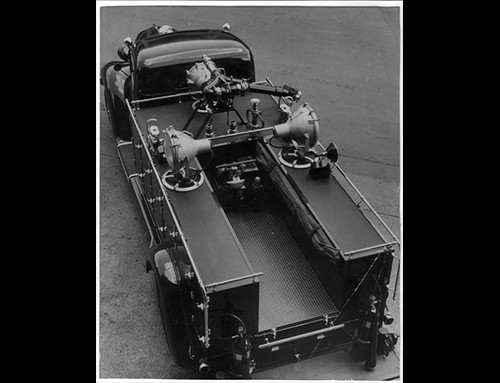 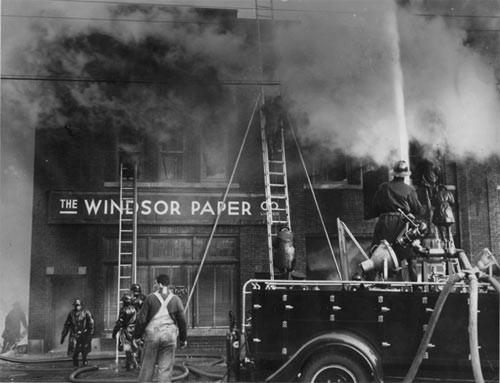 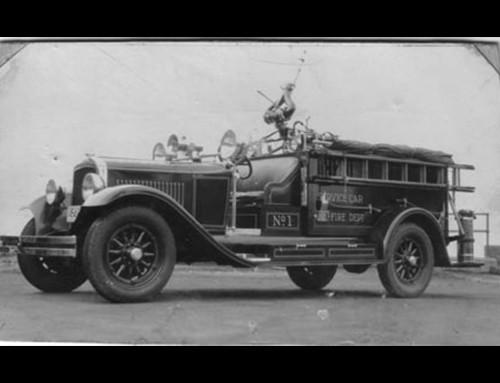 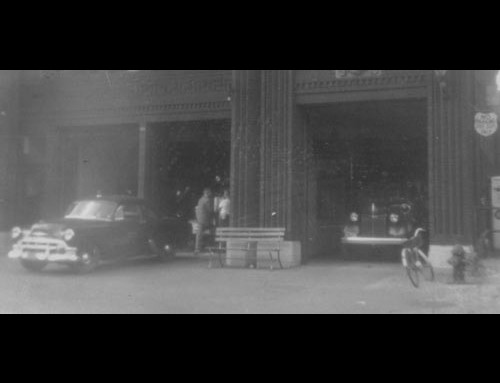 The Bug, far right, peeks out of its bay at Pitt St. Headquarters

Most of the current members of the Windsor Fire & Rescue Services won’t recognize this colorful nickname, but just mention “The Bug” to any longtime Windsor Fire Department retiree and you’ll likely trigger a wry grin – and a slew of great stories.

For more than two decades, “The Bug” was the Windsor Fire Department’s elite flying manpower squad – speeding (and we do mean fast) to every box alarm in the city out of the old W.F.D. Headquarters station on Pitt St. E. in the heart of the city, across the street from the bustling City Market.

But interestingly, “The Bug” was not a Rescue Squad. It was known as the W.F.D.’s Service Car – later redesignated Salvage No. 1.

This colorful chapter in Windsor Fire Department history began in 1930, when Master Mechanic Arthur Flatray and his small workshop crew converted an accident-damaged 1929 Dodge assistant chief’s car into a special service unit. Placed into service that depression year, Service Car No. 1 carried a quantity of canvas tarpaulins, which were spread over goods or furniture at fire scenes to minimize water and smoke damage and insurance losses.

In addition to a large supply of salvage covers, mops, buckets and other cleanup tools, Service Car No. 1 was equipped with a large three-inlet Eastman turret pipe mounted behind the driver’s seat. Two big cowl-mounted searchlights provided extra illumination at night fire scenes. After nearly a decade of service, the now-outdated 1929 Dodge was clearly due for replacement. In late 1939, Service Car No. 1 was traded in on a new 1940 Ford two-ton truck chassis. Master Mechanic Art Flatray and his staff fabricated an all-steel, compartment-type body for mounting on this chassis. Three big portable floodlights and a fixed turret pipe were mounted on the truck’s deck, just behind the closed three-man cab. A Sterling 30 Sirenlight was mounted on the hood, just ahead of the windshield.

The first closed-cab apparatus on the Windsor Fire Department, the gleaming new Ford Service Car was placed in service at the Pitt Street Station in late 1940. The driver and officer rode in the cab. Three or four more firefighters rode in the rear – hanging for dear life onto low chrome handrails. A few years later a canvas windbreaker with celluloid windows was installed in the rear body to shield the men from the wind and cold. The Service Car responded to all box alarms, structural and extra-alarm fires in the city. It was a long run from Pitt Street out to the Sandwich East Township border on Tecumseh Road East, and on a calm day your could actually hear that lusty siren as the Bug left the Pitt St., hall. The Service Car was one of the first vehicles in the department equipped with a two-way radio so runs could be cancelled en route if the Service Car was not needed.

The origin of its colorful nickname has been lost to time, but the Service Car was known as The Bug to Windsor firefighters from the 1940s well into the 1960s. Perhaps it was because it was so fast and seemed to be everywhere. Within minutes of the arrival of the first-due pumper and ladder truck, The Bug and its jack-of-all-trades crew came screaming up the street. After performing any required rescue or salvage roles, the Service Car’s three or four-man crew pitched in to assist the other firefighters in handling hose lines, ladders, etc. Salvage work included nailing temporary tarpapers covers over holes in roofs, mopping up and brooming out water and securing the fire-damaged building.

Repainted in the early 1950s, the 1940 Ford was redesignated Salvage No.1.The Bug was quartered in the east bay of the Pitt St. hall, in front of the Junior Aerial. The skill – and daring – of its seasoned drivers were legendary. They still tell stories of the Bug becoming airborne on the old Peabody Bridge while responding east on Riverside Drive.

The Bug went through at least two Ford flathead V8 engines. By the mid-1950s it was fast wearing out, and plans were drawn up for a replacement. So it was that on June 18, 1957 – after some 17 years of hard urban service – the 1940 Ford was retired and taken to the W.F.D. shops on Richmond St. next to Station 2, where it was stripped of its gear. The still-serviceable body was removed from the chasses, rebuilt with a closed canopy and remounted on a new 1957 Fargo chassis. The shiny new Salvage No. 1 was placed in service in September, 1957. But we’re getting ahead of ourselves. That’s another story!

Even though the nickname endured for another decade, there was no “Bug” like that flying `40 Ford!. Just ask any of the old-timers at the next W.F.D. retirement banquet.