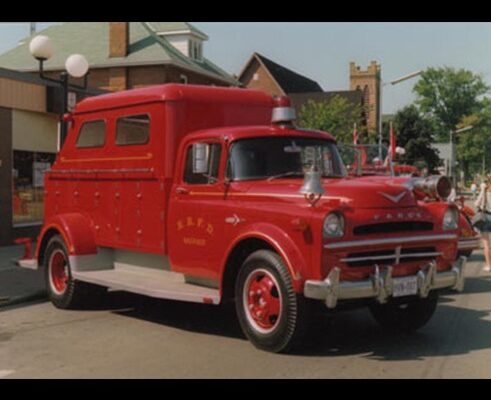 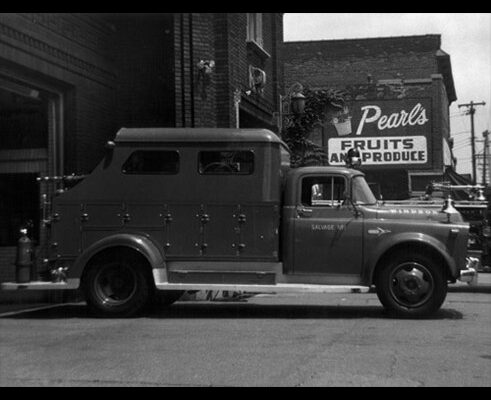 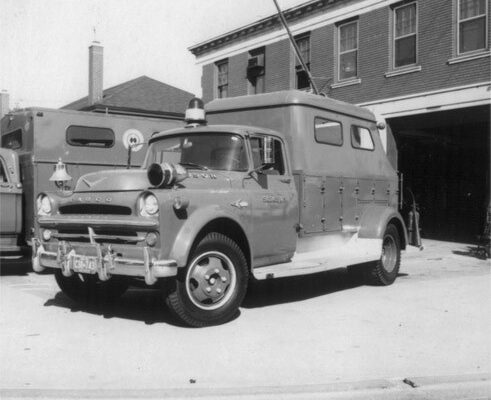 After nearly 17 years of hard urban fire service, “The Bug” was simply wearing out. The fleet-footed 1940 Ford had already been through two flathead V8 engines, and repair parts were becoming difficult to obtain. So in late 1956, plans were drawn up for a replacement vehicle.

A thorough inspection of Salvage No. 1 (better known by members of the Windsor Fire Department as “The Bug”) by Chief of Apparatus Romeo J. Nantais revealed that the truck’s original body — designed and build by his predecessor, Arthur Flatray – was still in remarkably good condition. A decision was made to remodel and modernize the old body and transfer it to a new chassis.

In the spring of 1957, a new Fargo D-500 three-ton cab and chassis was purchased from Abbey-Gray Ltd., the Chrysler-Plymouth-Fargo dealer on Goyeau St. at Elliott St. E. and delivered to the Windsor Fire Department shops on Richmond St. next door to Fire Station No. 2. In mid-June of 1957 “ the `40 Ford made its last run out of the W.F.D. headquarters station on Pitt St. E. Its rescue and salvage gear was removed and packed into the open rear body of Hose No. 1 – a 1942 GMC hose truck, which would temporarily serve as “The Bug” while Salvage No. 1 was being rebuilt.

The compartmented rear body was removed from the chassis of the 1940 Ford, and a steel canopy style roof with small side windows and open at the rear was welded into place above it. By late summer the redesigned shop-built body had been installed on the new Fargo chassis. The portable Eastman turret nozzle from the 1940 Ford was mounted on the right-hand side of the rear body. A shiny new bell was mounted on the right front fender and a big Sterling siren on the other. Like its predecessor, the new truck was lettered Salvage No. 1 on its cab doors, with “Windsor” painted on the sides of its broad hood.

Including the Fargo chassis, the impressive new salvage truck had cost the department just $4,039. After thorough testing and driver training, the new salvage squad rig was placed into service at the Pitt St. headquarters station on September 30, 1957. Still nicknamed “The Bug”, the Fargo flying manpower squad responded to all box alarms and extra-alarm fires all over the city. Its four-man crew now rode safely inside the tall rear canopy where they were protected from the elements – a vast improvement over the original Bug’s wide-open, hang-on-for-dear-life rear deck with its largely ineffective canvas windbreaker.

Following the annexation of Riverside, Sandwich East and portions of Sandwich West the previous year, a new Chevrolet rescue squad truck was placed in service at Station 4 in the city’s west end in 1967. Salvage No. 1 was reassigned to Station 2 to cover the east side of the city. With the purchase of another new Fargo rescue squad in 1970, the older Fargo became a spare. After three decades, its colorful nickname faded into history.

After another dozen years as a spare, filling in when Squad 1 or Squad 2 were in the shop for maintenance or repairs, the old Fargo (now on its third Chrysler V-8 engine) was stored at various Windsor firehalls. Its fate was sealed with the delivery of a big lime-green Ford cabover engine heavy rescue unit it 1984.

In July of that year the 1957 Fargo salvage truck was sold to vintage vehicle collector Reg DeNure of Chatham – who still owns it today. Half a century after it was constructed in the W.F.D. shops, Salvage No. 1 still occasionally takes to the road at parades and antique fire apparatus musters in southwestern Ontario.