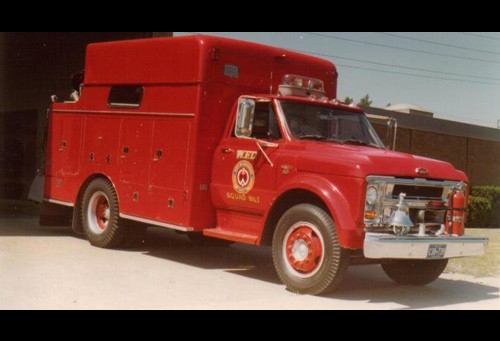 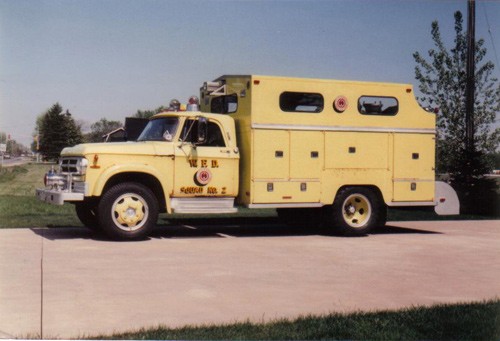 Since the formation of its first emergency life-saving squad in the early 1930s, the Windsor Fire Department’s rescue squad had always responded to alarms out of the W.F.D.’s Headquarters Station on Pitt St. E. in the city’s downtown business area. While handy to the city core, this location resulted in long runs to the extreme east and west sides of the continually-growing city. In the mid-1960s, Fire Chief Harold Coxon and his senior officers made the decision to form a second rescue squad to reduce response times to alarms in the west end of the city. A 1967 Chevrolet two-ton cab and chassis was purchased, and a medium-sized canopy style rescue body designed by the resourceful W.F.D. shops was constructed and mounted on this new chassis. Lettered Squad No. 1, the handsome new rescue unit was placed into service at Station No. 4 on College Avenue east of Huron Church Rd. in the latter part of July, 1968.

At the same time Salvage No. 1 – the 1957 Fargo squad known as “the bug” – was transferred from the Pitt St. hall to Station 2 on Walker Rd. to provide similarly improved coverage for the east side of the city. Depending on the location of the alarm – east or west of Ouellette Avenue – one of these two Rescue Squads responded to alarms in the central part of the city,

After little more than a year in service, the rear roof canopy of the `67 Chevrolet squad was raised to provide more headroom for the crew riding back there. The most distinctive feature of Squad No. 1, however, was the big Aurora Borealis warning light mounted on the cab roof. The only one of its kind in Canada, and forerunner to the emergency vehicle “light bars” that came later, this unique light was a gift to Chief Coxon from the Chicago Fire Department. Chief Coxon had befriended Chicago Fire Commissioner Robert J. Quinn at chiefs’ conventions in the U.S. over the years.

Late In 1970, a second heavy rescue truck was placed into service at Station 2. Equipped with a canopy type rescue body built by King-Seagrave Ltd. of Woodstock, Squad No. 2 was built on a locally-made Fargo truck chassis. The 1957 Fargo then became a spare, filling in for the other squads when they were in the shop for maintenance or repairs.

Both of these speedy, efficient rescue squads had three-man cabs and were powered by V-8 engines. Both sported businesslike front bumper extensions which held a winch, siren, bell and a foam fire extinguisher – handy for car fires.

During the late 1970s, both squads were repainted from their original red to the trendy new lime-yellow.

After 14 years of hard service, Squad 1 was replaced by a new tilt-cab Ford heavy rescue unit in 1982. Two years later, Squad 2 got a similar vehicle. After several more years of service as spares, the 1967 and 1970 squads were retired and sold.