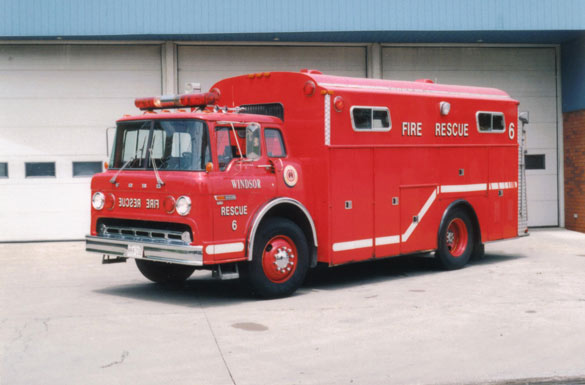 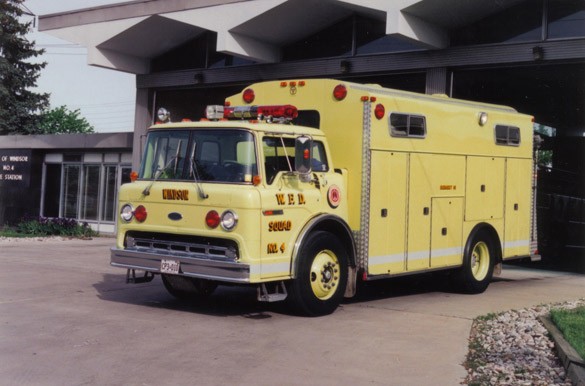 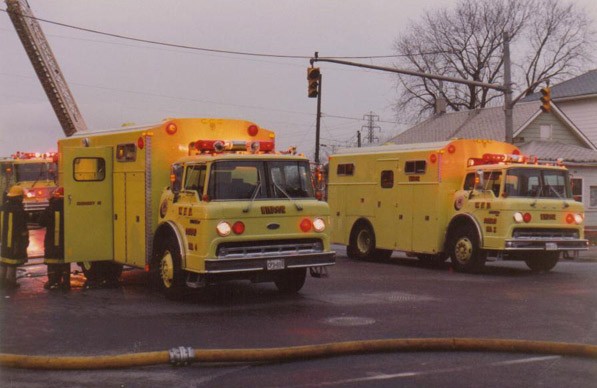 Purchased in the mid-1960s and early `70s, Windsor’s two rescue squad trucks were due for replacement as the 1980s began. Squad 1’s 1967 Chevrolet and Squad 2’s 1970 Fargo had been running hard for a decade or more – Squad 1 out of Station 4 on College Ave. and Squad 2 out of Station 2 on Walker Rd. The Windsor Fire Department acquired two new heavy rescue trucks in the mid-1980s. Both were on Ford tilt-cab C-Series chassis with large, fully-enclosed rear-entrance walk-in bodies and numerous exterior equipment compartments. Delivered in 1984 and 1986, both were powered by diesel engines and painted the trendy new lime-yellow color widely adopted by fire departments all over North America since the 1970s.

Designed and constructed under the supervision of Chief of Apparatus Mike Koehl, the first of these new heavy rescue units was placed in service as Squad 2 at Station 2 in the spring of 1984. The tall, rectangular rear body with right-side door and high-mounted side windows was built by truck body builder Wilcox Bodies. A second almost identical unit with Dependable body was delivered two years later. Designated Squad 4, the 1986 Ford heavy rescue unit was placed in service at College Ave. station.

Squad 2 covered the east side of the city and Squad 4 the west side, with Ouellette Avenue as the dividing line between response districts. The big yellow rescue squads with aerodynamic light bars and cat’s-eye flashing red lights between the headlights responded to all box and structural alarms in the city. Both squads could be found on the fireground at major fires or other emergencies.

Late in its career, Squad 2’s rig was repainted red and reassigned to Station 6 on Tecumseh Rd. E. where it responded for a few more years as Rescue 6, before being moved yet again to Station 3 on Edinborough St. as Squad 3. When a new Saulsbury/Spartan heavy rescue unit was delivered in 2000, there was a shuffle of the Windsor Fire & Rescue Service’s rescue units. The huge, new Saulsbury rescue truck was placed in service at Station 2. The 1984 Ford it replaced was repainted and transferred to Station 6. For the first time in 30 years, there was no longer a rescue squad at Station 4. The 1986 Ford squad formerly at Station 4 became a spare, filling in when one of the other rescue units was in the shop for service or repairs.

As of this writing, both of the venerable cabover Fords are still on the road – the red `84 as a backup hazmat unit and the lime-yellow `86 as a spare squad and general utility rig. More than 20 years after they were purchased, there’s no plan to retire either of these hard-working former lifesavers in the very near future. Mike Koehl would no doubt be pleased.