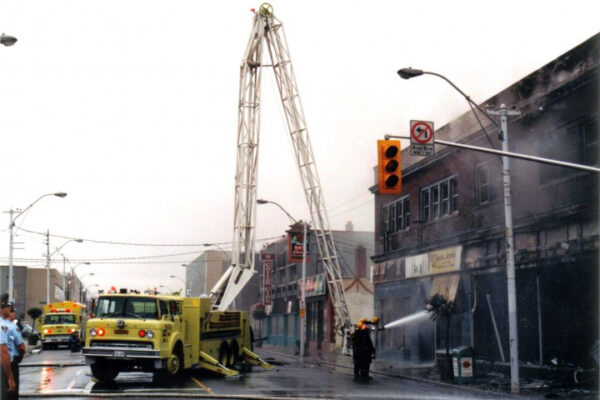 In action at three-alarm fire, Sandwich and Mills Streets 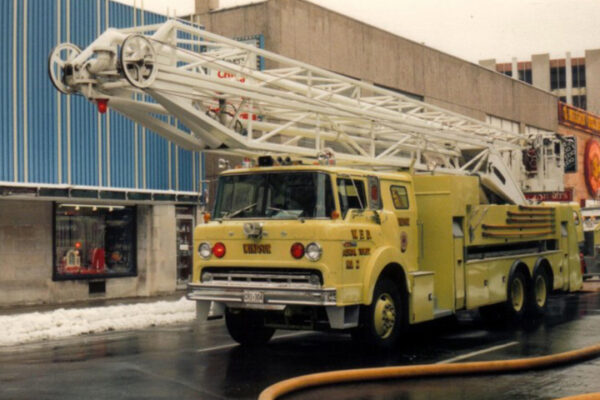 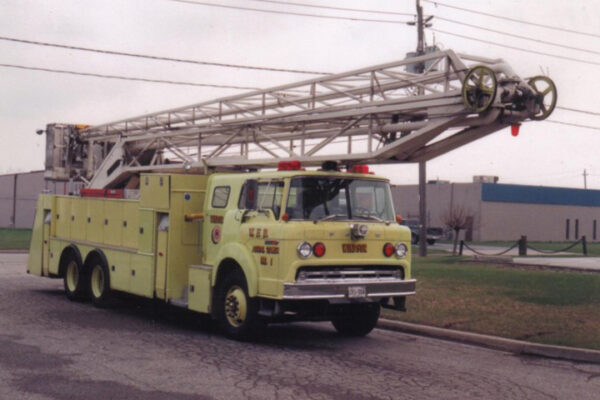 Introduced in Chicago in 1958, the elevating platform – or Snorkel – revolutionized aerial firefighting in North America. The Windsor Fire Department received its first elevating platform in October, 1971. Aerial Tower No. 1 was profiled in an earlier article in this series.

After nearly a decade of service, Aerial Tower 1 had more than proved its effectiveness and versatility at any number of major fires and rescues. So, in the early 1980s, when it came time for the W.F.D. to order another new aerial device, the decision was unanimous — another aerial platform! Not surprisingly, the contract for the new tower was awarded to the same company that had built and delivered Windsor’s first Snorkel in 1971 – Duke Equipment Ltd. of Burlington, Ontario.

Like the earlier delivery, the new aerial tower was built on a diesel-powered Ford C-900 tilt-cab chassis with tandem rear axles and Hi-Ranger 85-foot articulating boom made by Mobile Aerial Towers of Fort Wayne, Indiana. But whereas Windsor’s first Snorkel had a three-man closed cab, the new tower had an extended canopy-style cab with rear-facing crew seat. And where the 1971 tower was originally painted red, the new tower was painted a bright lime-yellow.

Tower 2 covered the downtown and near west side of the city, and Tower 1 the east side. As far as can be determined, Aerial Tower No. 2 was the first piece of Windsor Fire Department apparatus to spend its entire front-line career in the same fire station. In its 16 years of dependable service, Aerial Tower 2 battled some of the city’s biggest fires, including the Walker Rd. conflagration of June 30, 1985 and another huge industrial building fire on nearby Edna St. a few years later. Late in its service life, the cab doors were relettered Aerial Tower No. 1.

Both of Windsor’s Hi-Ranger towers went into reserve service with the delivery of five new Sutphen Aerial Towers in 1998. Within a few years however, both had been retired and sold. Old Tower 2 was last seen sitting in a truck storage compound near Las Vegas, Nevada several years ago, on its way west to an unknown purchaser.