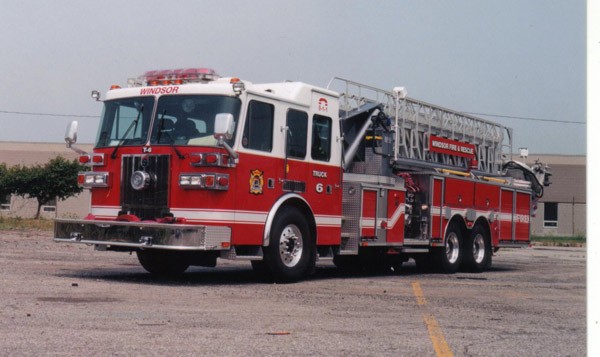 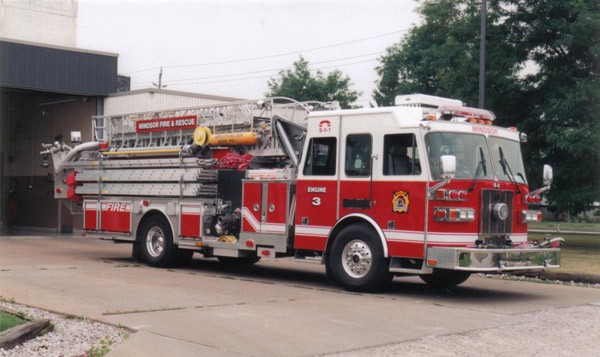 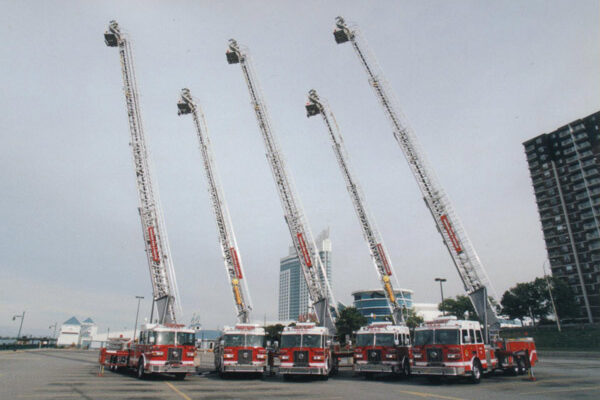 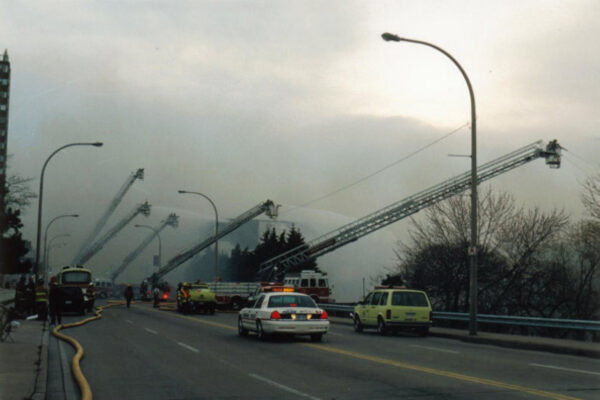 All five Sutphens in action at Holiday Inn fire, April 8, 1999

Clarence Sutphen founded his fire equipment sales business in Columbus, Ohio in 1890. Mr. Sutphen added motor fire apparatus to his wares when he became a sales agent for the Prospect Fire Engine Company in the 1920s. By the 1950s, Sutphen Fire Equipment was occasionally turning out a complete fire truck on commercial truck chassis such as Ford and Chevrolet. But it was the introduction of the pioneering Sutphen Aerial Tower in 1963 that almost overnight transformed the company into a nationally-known and respected player in the highly-competitive firefighting aerial platform business.The elevating platform, or Snorkel burst upon the firefighting scene in the late 1950s. By the early 1960s several firms were marketing articulating-boom aerial firefighting platforms on various custom and commercial fire apparatus chassis. Mounted on a tilt-cab Ford chassis, the Sutphen Tower featured a mid-ship mounted, three-section telescopic boom with two-man basket and prepiped monitor nozzles at its tip. The open-lattice boom was bolted together instead of welded, resulting in a light but exceptionally strong structure. The first Sutphen Tower was delivered to Norwalk, Ohio. Hundreds more have since been sold all over North America. Sutphen’s head office and plant is in the Columbus suburb of Amlin, Ohio.

The first two Sutphen Towers sold in Canada went to Nepean, Ontario in the 1980s – ordered by none other than our own Chief David Fields, then Chief of the Nepean Fire Department. It was not surprising, then, that Chief Fields was anxious to obtain one of these versatile aerial towers for the Windsor Fire and Rescue Service when the time came, in the late1990’s, to replace much of the city’s aging aerial ladder truck fleet.

In the city’s largest-ever single fire apparatus acquisition program, Windsor ordered no fewer than five Sutphen Aerial Towers for delivery during 1998. Three of the big towers had 95-foot booms. The other two were “mini-towers” with 70-foot booms. All were “quints”, equipped with 1,050 gallon-per-minute pumps, 300-gallon booster tanks with preconnected attack lines, hose beds and a complement of portable ground ladders. All had four-door crew cabs with raised rear roofs.

The first of the towers, a 95-footer, was delivered in March, 1998. After extensive crew training, it was placed in service as Truck 6 two months later. The other two 95-footers were assigned to Truck 4 and Truck 1. One of the 70-foot mini-towers was exhibited at the Ontario Association of Fire Chiefs (OAFC) convention in London in May. The two mini-towers were placed into service as engine companies, as Engine 2 and Engine 3. The last of the new towers was in front-line service by late October of that year. The 95-foot towers replaced two Hi-Ranger Snorkels purchased in 1971 and 1982 and two conventional aerials delivered in 1981 and 1982.

Over the dozen years that have passed since their purchase, the white-over-red Sutphens have seen action at every major fire in Windsor. All five of the new Sutphens battled the riverfront Holiday Inn conflagration on April 8, 1999 – the only time all five were used at the same fire. The Sutphen Towers have stood up well during twelve years of hard urban fire service. As this is being written, however, the sun is setting on this notable phase of Windsor fire service history. One of the towers is up for sale and plans are being made for the replacement of the other four with new aerial devices.